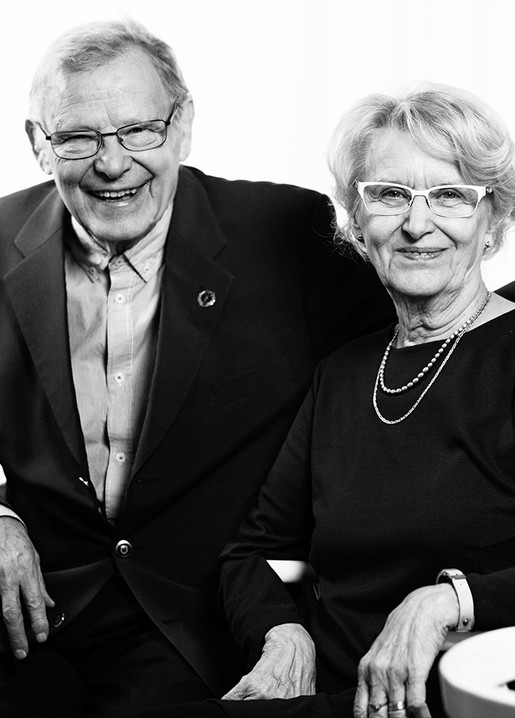 The 100 Years of Craftsmanship

In 1917 Juho Annala, the grandfather of Juha Hjelt, founded a felt boot factory in Lapua, Finland. In the 30's, Juha's father and uncle bought first weaving machines, and industrial weaving began. This was the beginning of the story of Lapuan Kankurit.

"I was born in 1939, and it was a beautiful autumn. Two months later there was World War II. So even as child, I learned to work hard. When I turned fifteen and got out of school, I was so eager to work at my uncle's weaving mill that I already had my working overall on, when I went to ask for a job. I started the same day and worked there for twenty years. We made e.g. wool blankets for the army, but also elaborated jacquard fabrics. I was an apprentice for an older weaving master who had worked in Belgium. When I thought there was nothing more left to learn, my wife Liisa and I started our own weaving mill in 1973 and named it Lapuan Kankurit (Weavers of Lapua).

We started quite small: we hired our son Esko's babysitter and another employee, who knew something about jacquard weaving. As parents of two children, it was a natural step for us to become entrepreneurs – although of course we were a little bit worried about how to make the ends meet. Our first products were traditional wall decorations. I travelled around the country selling them and took care of the technical matters in our weaving mill. We were lucky to be able to sell to big market chains. Our son Esko loved spending time at the weaving mill. There he would happily build castles out of cardboard boxes, in the middle of clanking machines. We lived near the mill, and even in the evenings if I had to go fix a machine, Esko insisted of coming along. Finland suffered in depression in the 90's, and it hit us hard. Eventually we pulled through, though. From today's perspective we were crazy not to fire anybody – not once! We wanted to take care of our own people, no matter what.

In 1999 we executed succession to our son and his wife. I was not worried at all. Esko is a fourth generation weaver and was well educated and prepared to run the company, as well as Jaana was. They have taken the family's hundred years' skill and expertise to the next level. It would of course be great if one of their children would eventually continue textile entrepreneurship in the fifth generation. I am very proud of the work Liisa and I have done, but even more proud I am of our children and grandchildren. An Ostrobothnian entrepreneur is one of a kind: he tries again and again, with no guarantee of success. He knows one day he will succeed."