A large portion of the wool of Finnish sheep is wasted, but now this wool will finally be utilised for industrial purposes

Lapuan Kankurit is investing in a new weaving and finishing line. This line will produce thread made from the wool of the Finnish Finnsheep. Lapuan Kankurit is the leading manufacturer of household textiles in Finland and it hopes to lead the way in the responsible utilisation of Finnish wool.

Lapuan Kankurit is also investing in four new Jacquard machines for its weaving mill in Lapua to add to the existing 20 machines and hiring more employees to meet the demands of increased wool production. The company also strives to build a unique, continuously operating wool textile finishing facility in Finland.

In total we are talking over 2 miljon euro investment.

”We want to use available materials responsibly and effectively and bring our own special expertise to bear in the processing of the wool of Finnsheep and other Finnish sheep. We know how to direct the industrial process using modern methods”, says Esko Hjelt, CEO of Lapuan Kankurit.

Up until now, the fine wool of Finnsheep has only been utilised by small operators and craftspeople for making mainly handicraft yarn and there has been a lack of Finnish wool thread for industrial weaving. The most significant reason for the poor utilisation rate is the low price of raw wool, which has not encouraged sheep farmers to undertake the laborious tasks of sorting and selling the wool. ”Once demand increases, the price of wool fibre will increase with it, making it profitable for the sheep farmers as well”, says Hjelt.

Bringing lost knowhow back to Finland

Lapuan Kankurit procures the certified ready-made wool threads it uses from carefully selected spinning mills mainly from within the EU area. Over the last year the entrepreneur has been touring Finnish sheep farms and has already acquired a few thousand kilograms of Finnsheep wool for the company warehouse.

At least at first, the wool will be washed in England because as of now industrial-scale washing is not possible in Finland. Once washed, the wool will be spun into yarn. We are also developing methods of utilising plant dyes in the dying of yarn. Finally, the yarn is woven and finished into wool felt at our own mill and new finishing plant.

Weaving is the specialty of Lapuan Kankurit, a manufacturer of high-quality linen and wool products, but in the finishing of wool, Esko Hjelt aims to utilise the theoretical knowledge his weaver master family has accumulated in fulling mills since the 1950s. ”We are a rebuilding a production line that had already disappeared from Finland. We are combining old knowhow with new technology.”

The Hjelts are pleased that the need for the systematic collection of Finnsheep wool has been recognised in recent years by operators such as Pro Agria, and they are happy to join cooperative projects on the matter.

”It is fun to drive around visiting farms and buying wool and all, but it does not make much sense in the long run”, says Esko Hjelt, the CEO of an export business aimed at Europe and Japan, and laughs. 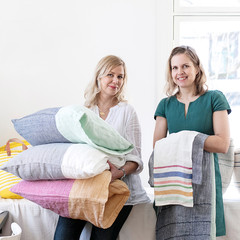